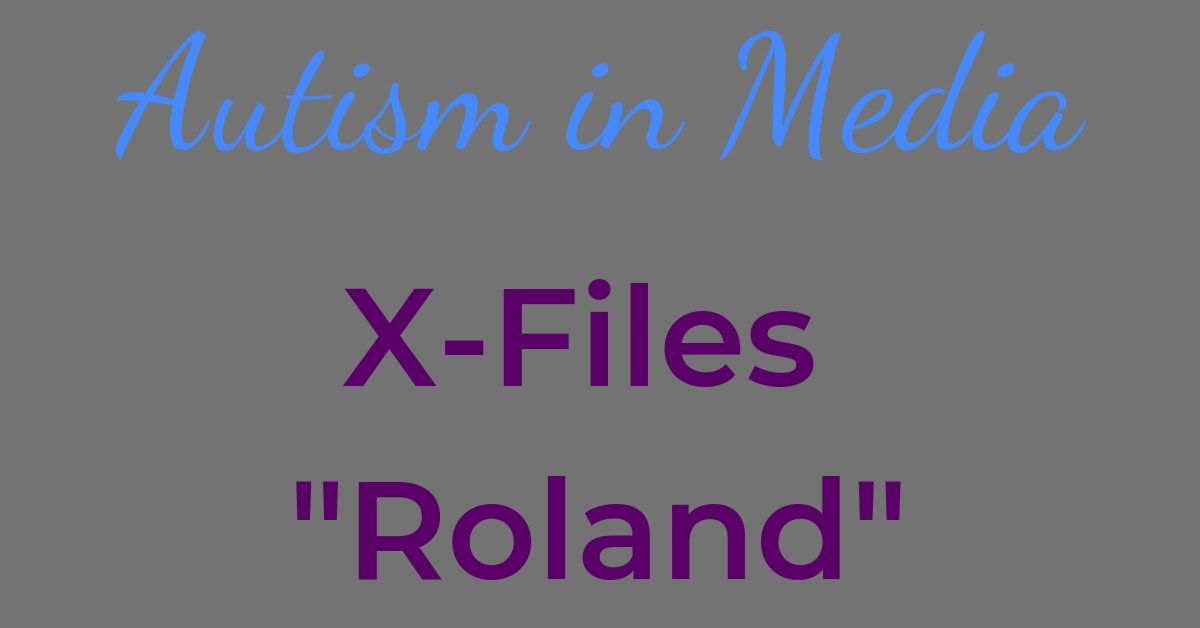 This month in Autism in Media, we’re jumping ahead from 1988’s Rain Man to the first season of X-Files in 1994.  There are notable portrayals of autism in the intervening years, and I’ll get back to them, but X-Files had extensive cultural reach in the 1990s, so I want to look at its work first.  Today’s selection is the first time autism is mentioned in the series: Season 1, Episode 24, “Roland”.

Before we start, a couple of things. First, this was written for TV in 1994 and didn’t involve an actor of Dustin Hoffman’s caliber, so it’s not going to be nearly as good as Rain Man – keep your expectations reasonable.  Second, this post will use the R-word a few times in reference to the stereotypes of the time; that was the word they used in those days and there really isn’t a better way to describe it.

Spoiler alert for a 25-year-old show: “Roland” is the story of a severely affected autistic man who is controlled by the ghost of his genius twin brother in order to finish his research and murder the other scientists who would take credit for his work.  Yes, it sets up an autistic person as a murderer, but more importantly, it portrays the autistic man as a tool, an object.

What They Got Wrong

Hoo boy, where to start?

I guess I’ll begin with Roland’s physical posture and quirks.  He keeps his head pulled to one side with a lot of tension in his neck, his arms are usually pulled up across his chest, his wrists are usually flexed inward and, when they’re not, his hands are spastic.  On top of that, he speaks as if he has a hearing impairment, although the character isn’t supposed to be hard of hearing.  This is almost exactly the “retard” stereotype that was seen everywhere from the playground to Very Serious Dramas in the early 1990s, but it has nothing to do with autism.  Another character, Tracy, who is played as having basically the same condition as Roland, also speaks that way, although she doesn’t have the physical characteristics he does.

Roland is often seen in distress, but he’s never shown stimming or otherwise trying to calm himself.  He screams sometimes, and he runs away from overwhelming situations, but that’s all.

Mulder is the first to mention autism in connection with Roland, and he does so because Roland counted the stars on Scully’s scarf at a glance.  Six years post-Rain Man, that’s still shorthand.  Scully underscores it by saying that “…savants behave only as human calculators…they can’t tell you the meaning of a number”.

Then, in the course of trying to explain how Roland could be the twin of a genius scientist, Mulder and Scully come to the conclusion that “Roland’s condition” is the result of a damaged chromosome that his brother’s body rejected in the womb.

Nowadays (wow, did I just use that word?), I think we’d assume that the genius twin brother had Asperger’s (or ASD Level I, in the DSM-V) since in utero factors are now thought to play a part in the development of autism.  But 1994 was the same year Asperger’s Syndrome was added to the DSM for the first time, so of course they didn’t know.

Roland is referred to as having an IQ of 70, which was common for autistic people for a long time because it’s very hard to test someone who is nonverbal or just unresponsive.  He obviously does have some kind of cognitive impairment and he’s said to be “mentally challenged” (that was very politically correct language in the 1990s). There’s been some progress in IQ testing for nonverbal people since then that allows for a more accurate IQ score.

And just to address the pink elephant in this episode, yes, this story does perpetuate the “dangerous retard” idea that was prevalent in pop culture of that time.  Roland is shown to be very strong and brutal when he kills.  Even the fact that he’s not in control when he hurts people just plays into the “out of control crazy person” idea.  The 1990s were not a great time for disabled people – the Americans with Disabilities Act only passed in 1990 and the general public was still learning how to not freak out at the sight of someone in a wheelchair or the thought of someone with a cognitive difference.  We’ve come a long way, believe it or not.

What They Got Right

Yes, they did get some things right!

First, Roland does avoid eye contact almost entirely.  And some autistic people can do the human calculator stuff with patterns, which is a cool ability.

According to the story, Roland was taken away from his family at age 3, in 1955.  That would have been the norm at that time, to send the autistic child away and focus on the “normal” child.

As adults, Roland, Tracy, and at least one or two other adults are shown living in a “halfway house” (more like a communal home) with a sort of House Mom looking after them.  They don’t seem to need a lot of help with hygiene or anything, but I still find it a little odd that there aren’t any other staff members there to help.  House Mom also insists to Mulder and Scully that Roland had never shown any violent tendencies – one of the most reasonable things said about an autistic person in this whole episode.

It’s tempting to say that it was just 1994 and they didn’t know any better, but having seen Hoffman’s respectful performance in Rain Man, I have trouble doing that.  Not having cognitive impairment myself, I can’t decide if this portrayal is infantilizing or not – I feel like it is, but that’s not really my place to say.  I must admit, hearing Dana Scully spew outright junk science is jarring and feels a bit like a betrayal.  All in all, I think this story was written by someone who knew little to nothing about autism and didn’t care to learn – they just wanted to use it as a plot device.  That happens surprisingly often in sci-fi and paranormal stories.  I’m not a fan of this one, even though I still love X-Files itself.  There are a few more episodes that touch on autism, and we’ll talk about those in the coming installments of Autism in Media.

What do you think of this portrayal of autism?  Do you think the way they showed adults with cognitive impairments was insulting?  Are there other representations of autism in media you’d like me to take on?